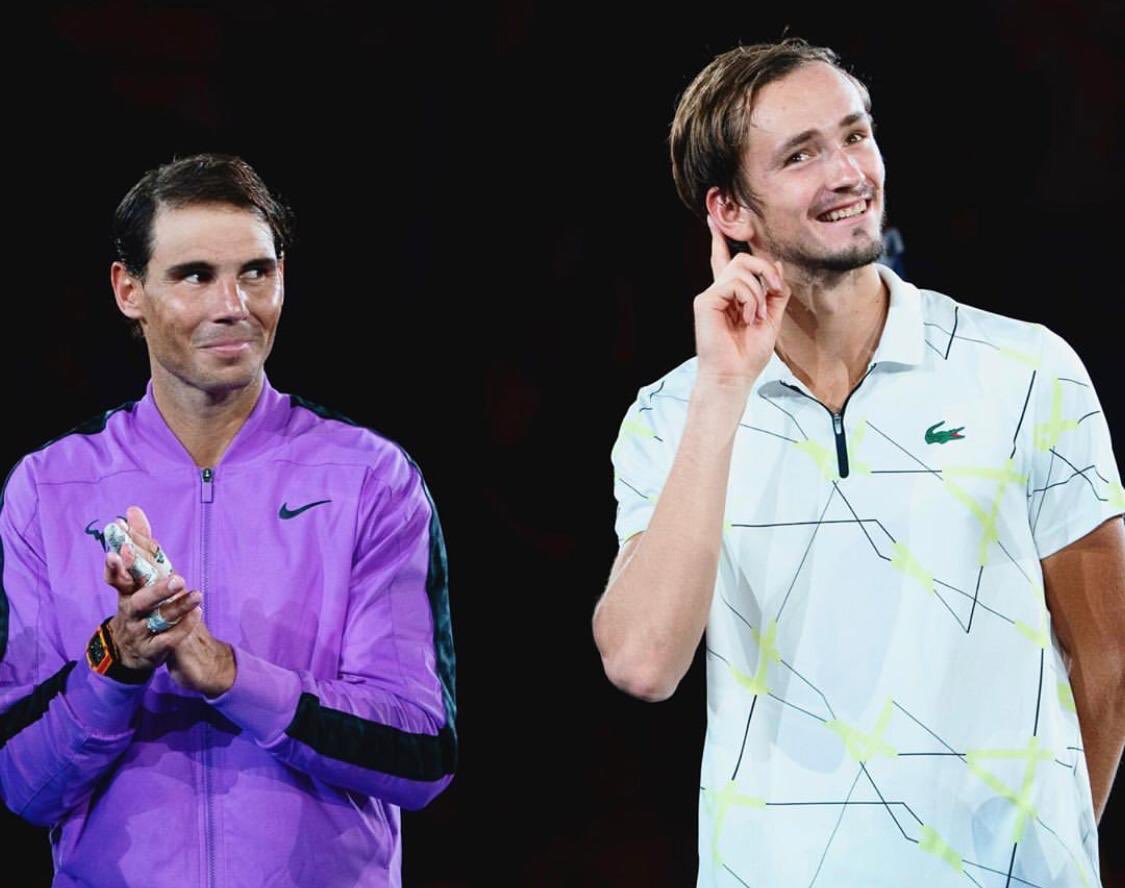 First half (two and a half sets)

It all started with Rafa Nadal’s tactical lesson on how to play against counterpunchers. Variety, variety, variety, and the savvy alternation between a passive and an aggressive game. A “passive” play with no angles from Nadal was forcing Medvedev to hit bigger than he normally does, and he felt he had to hit a winner to win a point, which took him more than it usually does, against the “king of defence”. And the result was this: energy dissipation and unforced errors. Medvedev doesn’t like to hit winners on every point, especially not with his forehand, and he is certainly not used to it. Rafa was also using backhand slice to Medvedev’s backhand, taking the pace out of his long arms, which caused a couple of extra unforced errors. With a possibility in his mind that Medvedev will eventually get used to this pace and start making those winners, Rafa was constantly switching to a very aggressive play. That included his trademark game: one – two punch (serve + forehand) and, to my surprise (and from what I hear, not only mine), he played the serve and volley more than I’ve ever seen him do it, and he won 17 out of 20 points. There was a clear pattern: a wide serve on ad side and close the net. In the first half of the match, for every important point on his serve, Rafa played that pattern, and Medvedev just didn’t have the right answer. I have to say that the angle of Rafa’s wide serve was outstanding last night.

Second half (two and a half sets)

Just as everybody thought that this was going to be another good yet ordinary final, Medvedev said no, I’m not going out like this, and then he made a crucial break back in the sixth game of the third set. The unique New York tennis crowd recognised the moment for what it was and the match suddenly turned into a street fight.

Well, not only that, the tactics played an important part, too. Medvedev resorted to his contingency plan and started to play smarter, using his serve and volley pattern where he won 22 points out of 29 attempts, and most of it happened in the second half of the match, which indicates that he did serve and volley at least twice per game. Medvedev also started to play the patient points, waiting to defeat Rafa from counter angles; he stopped overhitting and started hitting hard in a more rational fashion.

But that’s just one part of the scenario that took place at the Arthur Ashe stadium last night, and it wouldn`t have been even nearly enough to turn this match into an epic battle without the mental and physical toughness that Daniil Medvedev showed on that central court yesterday. I have never seen anybody really outlast Rafa Nadal. I saw him being outplayed by Roger and Novak, but that’s a whole different story. Last night was mainly about the physical and mental resilience and pure guts that this young man from Russia somehow pulled out from within his skinny body and his genius mind. Match took a different pace, and when Medvedev won the first game of the fifth set, the momentum was entirely on his side. Just as I thought that Daniil Medvedev was really going to pull it off, that he was going to outlast and beat Rafa Nadal with his own greatest weapon, there on the biggest stage in tennis, Rafa somehow shifted to a different gear and found another hidden tank of energy within him, and played some of the toughest points I have ever seen him play. With the help from the crowd that was going absolutely wild, there were moments that looked like a transcendent experience for both players. They really went over the top by many standards.

I guess this reservoir of extra strength that Rafa found last night is something that gradually accumulates within a person, with years and years of discipline, dedication and hard work, waiting to be used at the most challenging moments. It reminded me of a story in which a mother gives her daughter a key to a special door that opens a place that will save her from any problem or evil she might be facing in this world. But the thing is, that the door can be opened only once in a lifetime. Mother told her to better make sure she picked the most challenging and unsurmountable problem to use that key for, because she didn’t want her to waste it on something she could easily handle by herself.

Only Rafa knows if he used that key yesterday evening in New York. At some moments, it certainly looked that way, but we will never know. Anyway, I hope he saved it, though, because he is on the mission that is not finished yet, and looking into the future, with big three still at the very top of the game and with new warriors like Daniil Medvedev growing and learning from each match, Rafa might need it even more very soon.