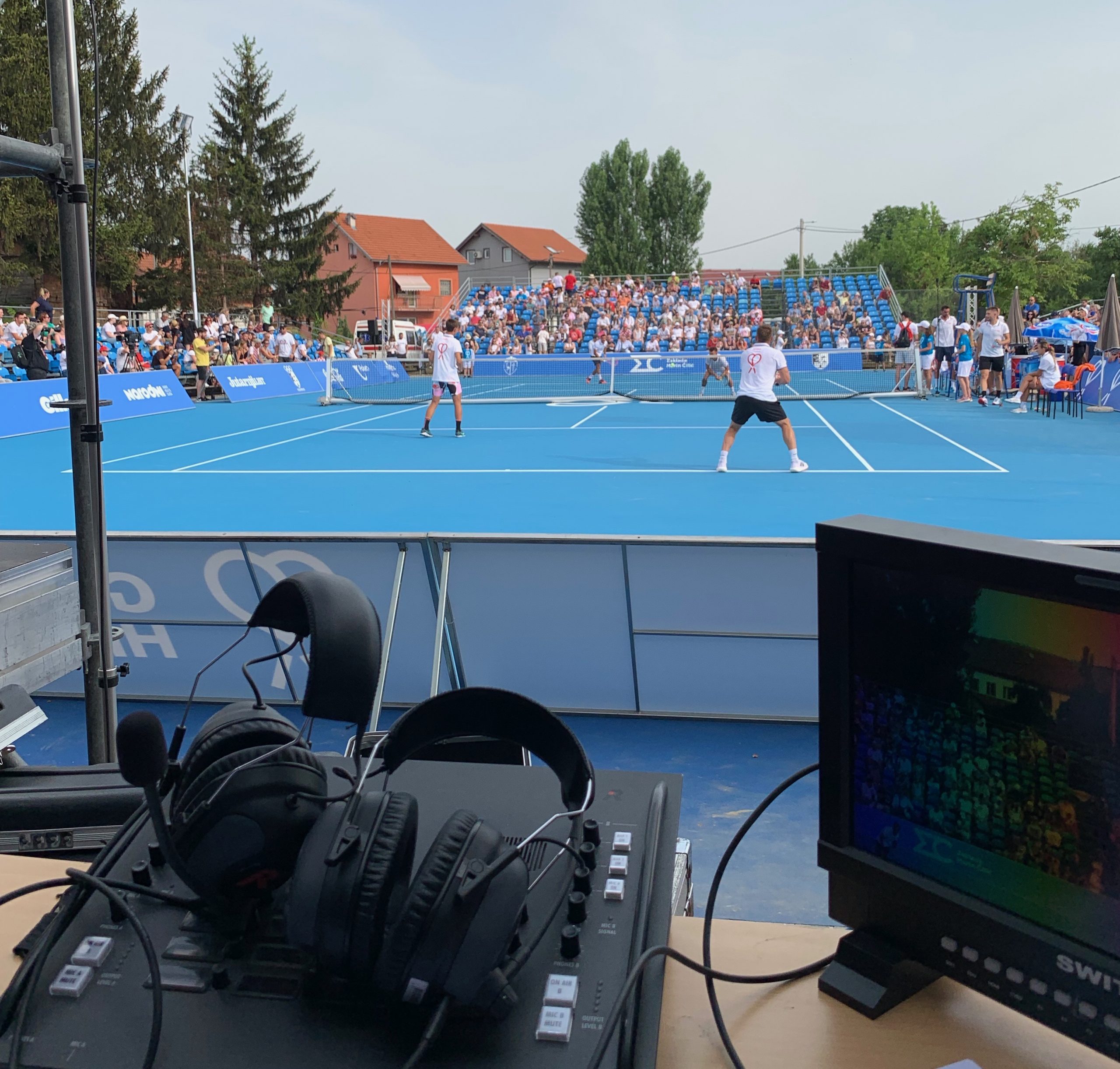 Have you ever seen a soccer player playing tennis and thought to yourself – wow, this guy is moving really fast?

It was a very hot summer afternoon in Petrinja, a small Croatian town that was badly hit by an earthquake with a magnitude of 6.4 Mw several months ago. The majority of houses were damaged to the level of being unlivable, so people had to move out to temporary mobile homes. I was sitting in a courtside commentator`s box at 38 degrees just behind the base line of the tennis court. The court has been recently set up through the initiative of the Marin Čilić Foundation that hosted the charity tennis tournament which included the superstars from the variety of sports. The goal was to generate funds to build another tennis court for people in Petrinja. For me as a tennis coach it`s always very interesting to see how athletes from other sports perform on the tennis court.

I have to say, I’m still under a great impression from what I witnessed on that hot summer day. The image of Mateo Kovačić running towards the unreachable drop shot hit by Ivan Dodig is still running on replay in my head. At least I thought it was unreachable – until Mateo actually got to it like it was just a walk in the park! I looked at my colleague on the other side of the commentator`s box and his face was saying exactly the same: how on earth did he get to this ball?! These kinds of insane sprints were just going on and on – Mandžukić, Perišić… They just looked like they could catch just about anything. Even though tennis players moderated their shots for the sake of the game, I felt that if they started hitting full speed, nothing would change; those guys would still run all their shots down, anyway. They wouldn`t return every ball because of the lack of technical competence, but they would surely run them down.

In the last ten years, the field of physical conditioning in tennis has changed in many ways. From once being a part time activity (few training blocks per year) to becoming a full time everyday activity. Trainers and physiotherapists became standard members of the players` team throughout the whole year. Their work is getting more and more specific, and it’s built around the individual needs of every athlete.

The general trend in physical conditioning is certainly moving farther away from the fundamental training methods like running, jumping, sprinting long and short distances, playing multiple sports like football, gymnastics, basketball, skiing, swimming, etc. Not long ago, kids used to do that as part of their everyday routine on the playground, however, as the world changed and there are less and less playgrounds, those activities are slowly fading away and are sometimes even perceived as dangerous. “Don’t jump, it’s too challenging for your knees; don’t run too long, it will make you slower; don’t sprint more than a 4 m distance, it`s a waste of time for tennis (why would you train for something that is not happening on the tennis court); don’t play soccer or go skiing, you might get injured, etc.

In Petrinja, I watched soccer players adapt to a specific tennis movement in a couple of minutes without any problems. They were sprinting, stopping, jumping, changing directions, even sliding in a truly impressive fashion. They surely did not practice that. Those guys were literally flying around the court. My mind drifted away from the tennis court towards a soccer field where I pictured them doing repetitions of 50/60 m full speed sprints; I saw them jumping and reaching high balls with their heads; I saw them falling down and getting up; I saw them having to control the ball during a physical duel; I saw them changing direction on the soft and bumpy grass surface; I saw them running without stopping for 90 minutes; I saw them playing variety of dynamic games during training sessions.

I’m aware of a very strict selection process in soccer where only the most genetically gifted kids are selected to play at the highest level. That is for sure a strong argument for my state of astonishment in Petrinja. However, 15 years ago, I played tennis with Zvonimir Boban, a soccer legend in my country. He told me that he had never been nearly as fast as the fastest players on his team, where his teammates left him 20 meters behind on a 100 meters sprint. He wasn’t genetically gifted, although when I played him, he was still very much flying around the tennis court. He told me that tennis movements came very natural to him, like he could almost jump to every ball with only one step. The tennis court was too small for him. He said: I’m sprinting up and down the huge soccer field with someone chasing me all the time. Moving on the tennis court is easy for me.

Anyway, times on the playgrounds are over and we can’t expect from a kid to get that initial solid athletic base by playing a variety of sports. However, we can’t also expect that too many static exercises, no running, rarely sprinting, assisted stretching, simulation of specific tennis movements off the court (like playing tennis all day long), heavy weight gym training – will make our players fly around the tennis court. I’m not trying to say that teaching a player how to slide is not useful, or that a specific strength training isn’t a much-needed part of the injury prevention program, however that is just a cherry on the cake.

Basic training, as the word itself implies, is the foundation. First, we need to have the solid base to be able to build anything specific on it. I see a completely different situation all the time, where athletes are focusing on the specifics without having the solid fundamental athletic skills. In the absence of quality basics, any specific training is a waste of time.

One of the reasons for this is hidden behind the intention of coaches to justify their knowledge by focusing on the work that looks good. Specific exercises are generally more complex, they often require some special equipment which, altogether, makes the coach feel more appreciated. Basics are too simple, hard to sell, and they seem like everyone can do them. One of the important skills of any coach is to be able to differentiate what looks good from what truly impacts performance. And when we do define what really impacts performance, it takes courage to apply it because it is usually a less likable option.