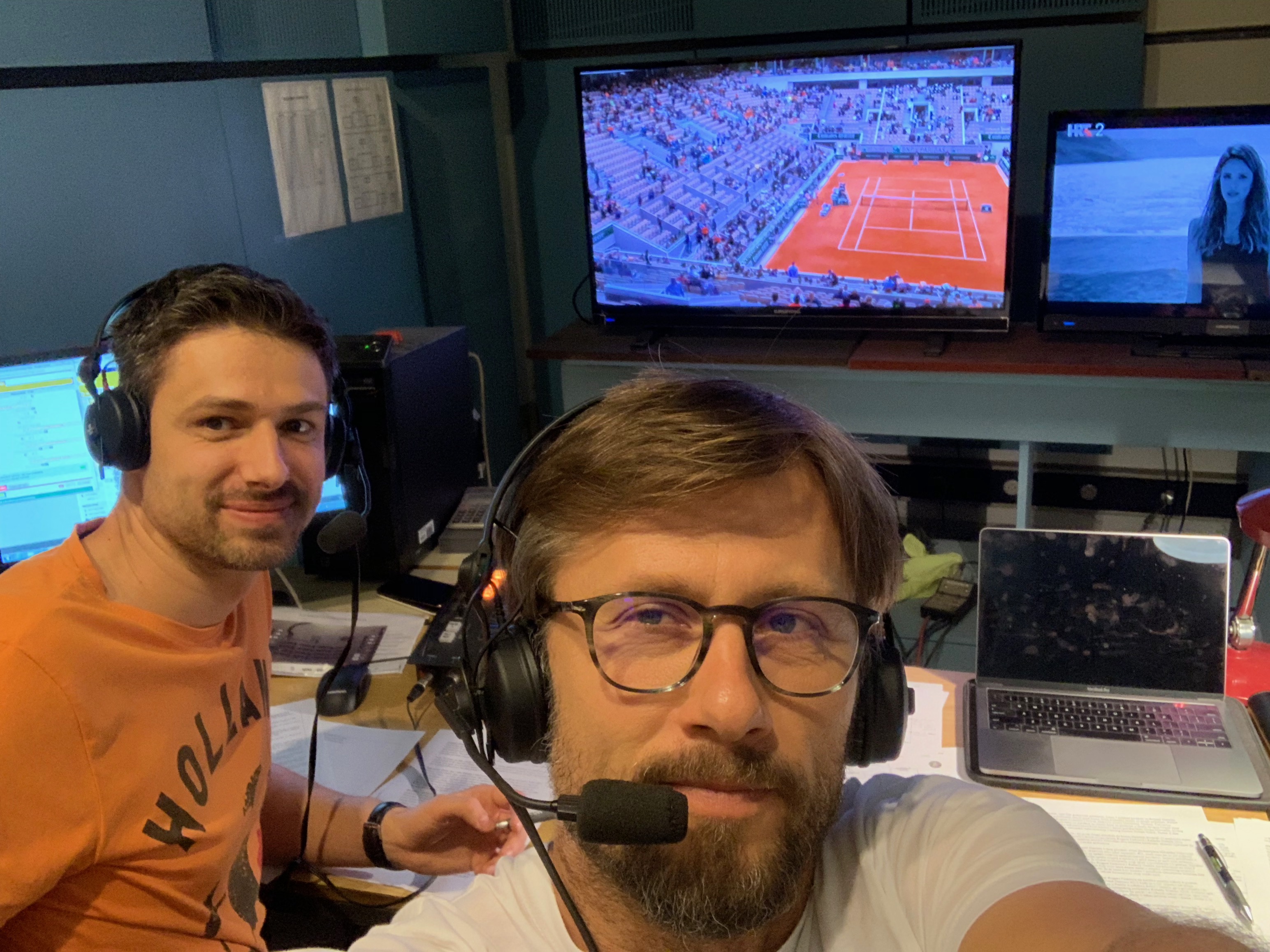 From the commentating booth

So, I got a phone call if I would like to be assistant commentator for Roland Garros on Croatian national television. I was hesitating to give a straight answer because I was afraid of a challenge, yet somehow deep inside me I immediately knew that I will accept it. Although I hate actions outside of my comfort zone, I’m also very aware of the benefits they could provide, so I took the job. As I’m a safe guy that doesn’t like risks, I started my preparation work, but very soon I realized that I don’t know how to prepare for something I’ve never done before, so I had no choice but to accept the adventure, uncertainty and possible failure.

To make a story short, it was one of the best experiences of my life. Not only it was fun, interesting and in a company of good people, but most of all it was a personal improvement process. Level of concentration in pre-match preparation, as well as in the match itself, for a period of fifteen consecutive days, was a real brain training for me, and it would be impossible to put myself into it without this type of a challenge. I know it’s already a cliché to speak about uncomfortable zones, routine as a silent killer, etc., so I will stop here, but I have to say, it’s all true.

I expected a very interesting Roland Garros, I knew that all the best players are in good form and I was quietly hoping for a perfect scenario. Novak won last three majors and wanted to complete four in a row for the second time, Roger was back in Paris after 3 years, Rafa was chasing historical twelfth title, Dominik Thiem was ready to win his first big title on his favorite surface. And the perfect scenario has happened, semifinals with the four best players in the world and something we didn’t have since 2012 Australian Open.

Rivalry between Roger Federer and Rafael Nadal has marked this sport in last fifteen years, and is known as the greatest rivalry in tennis history, and arguably of the sport in general. Everybody who loves tennis, and those who follow it just occasionally, had their eyes on Roland Garros central court this Friday afternoon. Mats Wilander gave an interesting comment before the match and described Roger Federer as consistently unpredictable so far in the tournament. For me, this was the question: can he stay consistently unpredictable for the whole match, which is very hard to do, especially from psychological point of view. And he couldn’t. Roger was stuck into too many typical clay court patterns as in their previous five meetings in Paris. Level of difficulty to play high one handed backhand on the rise, against Nadal’s lefty bouncy forehand is enormous, and to play it and control it for longer period of time on clay, is probably impossible. The wind affected Roger’s game more, but Rafa was just too good again. It was touching to see standing ovations from traditional Parisian tennis crowd when Roger left the court. Maybe subconsciously they knew this might be the last time they had a chance to see these two legends play each other in Paris.

Tennis’s most famous debate: who is the best player of all time?

A never-ending debate in which, in one way or another, we all enjoy. All possible parameters are being analyzed here, like: who won the most GS titles, head to head matches, weeks on number one, etc. I think the debate itself is great for tennis, we all have our favourite, we like to discuss about it, and at the end we follow and enjoy tennis even more. Is this race ever going to end and are we going to have a winner? I think we won’t and I think we don’t have to. It’s the race of three different characters, three different game styles, three players that we can watch for whole Sunday afternoon without being bored, three men that carry this sport and change it for the better, many would agree that in this race we have three winners.

Why Nadal is unbeatable on Philippe Chatrier?

Philippe Chatrier is the second smallest Grand Slam center court by capacity, but the biggest by the playing space. “It’s like Maracana“, says Gustavo Kuerten. Dimensions of the tennis court are off course always the same, but the space behind the lines is not, and that makes a difference on the feeling that players have while playing. That is exactly what makes Chatrier, the most spacious tennis court in the world. “For the opponent is a little bit more difficult to attack, to see a clear winner“, says Rafael Nadal. Another thing that influence on dynamic of the game at Chatrier, are the stands. For example, Chatrier has the same dimensions of the space behind the lines like Rod Laver arena, but the stands at Laver arena are placed more vertically, while on Chatrier stands are very open and that gives another impression of the open space. It is something that suites Nadal’s game of wide angles, high top spins and phenomenal back court defense.

Maybe Chatrier favors Rafa but that’s far from the list of main reasons why he wrote history on last Sunday afternoon. His passion for improvement is one thing that stands out. I remember watching his practice at Wimbledon 2017. I was sitting at Aorangi player’s lounge and Rafa was practicing on the practice court No. 1. He was there, all by himself, hitting serves, with just uncle Tony standing far back on the sideline. Some people came to my table and we had a nice chat with coffee and tea. After more than 45 min, I turned my head towards a practice court, and Rafa was still there, doing the same thing, hitting serve by serve aiming at an empty can of tennis balls. There was a man that just a few weeks ago won his 10th Roland Garros, achieving something that had never been done before, practicing his serve in silence, highly focused, alone, without coaching, until he finds what he is looking for, the perfect shot. And then, there is always this honesty and simplicity behind the words of Rafa Nadal. He was asked recently how he trains mental toughness: “You work mentally when you go on the court every day. You don’t complain when you play bad, when you have problems. You put the right attitude, the right face, you are not negative. You go on the court every day with a passion to keep practicing. That’s the mental work, no? That’s something that I did during all my career and that’s why I was able to always have a chance to be back.“

WTA has changed in the last five years and became more unpredictable, with many potential winners on each tournament, which makes it more interesting and attractive. We have 21 different winners on 26 WTA tournaments this year. “Next Gen“ group of young players is knocking at the door of elite tennis, which is confirmed by the fact that this year we have four winners of WTA tournaments that are under twenty years of age (Kenin, Andrescu, Yastremska, Anisimova). 17 years old Amanda Anisimova reached semifinals here in Roland Garros, beating defending champion Simona Halep in flying fashion. The way she plays, the way she moves, the way she looks, in my opinion are signs of a next big tennis superstar. Then we have Czech girl with super talented left-hand Marketa Vondrousova, who played finals of a Grand Slam tournament last Saturday with just 19 years of age. Impressive! Her match against Petra Martić was probably the most interesting women’s match of the tournament. It was athleticism, variety, shot making, dropshoting, sliceing, serving, emotions and a very tight scoreboard, everything was in that match. With all this youth and diversity, plus a world nr 1 Japanese Naomi Osaka being only 21, women’s tennis is looking towards a bright future.

Ashleigh Barty, kindest girl with tennis that is a pleasure to watch

A true example of an athlete, a girl that is impossible not to like. Her presence on and off the tennis court is just normal, no drama in good or bad, she is a modest, regular girl that doesn’t stand out with nothing but with her game, the way she plays tennis. And she plays the game in a true sense of the word. Tennis world respects a Roland Garros champion Ashley Barty.

Match of the tournament?

“We both struggled, we both went beyond our limits, we both experienced luck and our destiny was drawn on that Parisian court after five hours of physical and mental suffering. Today I learned something that no school, no classroom, no teacher would be able to teach, it’s called living life!”  Stefanos Tsitsipas, after the match against Stan Wawrinka.

It was a match between a boy with a face of an artist and heart of a warrior and a true champion that proved once again, when many were doubting, that tattoo on his left arm “ever tried, ever failed….” is not just a bunch of words to him, yet something that describes his character, his life path.