A champion`s mind – born or trained 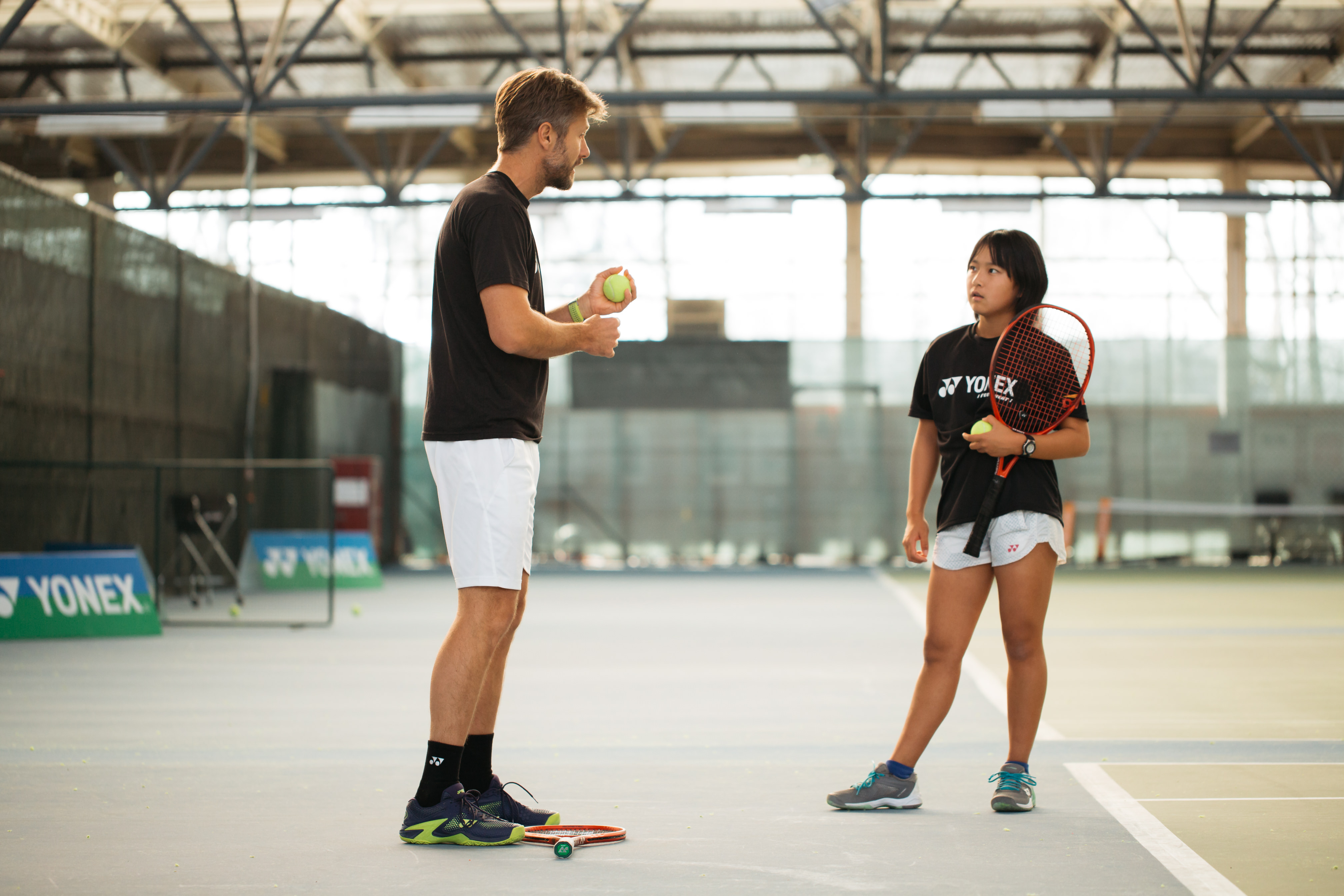 12 May A champion`s mind – born or trained

Without a doubt, a champion’s mind is a set of specific human skills that make all the difference between a good and a great athlete. Recently, I`ve come across an area of research from different authors who explored particular aspects of brain function as important predictors of better performance in a variety of everyday activities. When we look at tennis players, some of them, even from the young age, respond differently to mentally challenging situations; they think differently, react differently, they are better in sustaining attention and, if they give up, they do it much later than others. While trying to define and understand the “mystery” behind a champion`s mind and its power to make so much difference, one question always comes up: are we born with it or trained into it?

“In a wide variety of human activity, achievement is not possible without discomfort.” (Malcom Gladwell, 2018)

It was a late winter afternoon in a training centre on a mountainside of Slovenia. I was sitting in a car next to the professor Mirko Krolo, who was driving through a tall and dense mountain forest. It was already dark outside, as the sun is setting very early at that time of the year, and the sound of ice cracking under the tires was more scary than romantic. High beam lights were on, and all we could see was snow, dark green pine trees and one man running in front of us. His name was Mario Ančić, and he was one of the best tennis players in the world at the time. This particular running trail was four kilometers long with a constant uphill ranging between 2.5 – 5%, at the altitude of 1600 meters. Mario`s goal at that training was to run as fast as he could to the top, and we were there in the car just behind him, watching his every step. I had a role of a “race lead” which included jumping out of the car, run in front of Mario and push him to keep the good pace, and when I was out of breath, I went back to the car and repeated the routine on professor’s command. Even though the moment itself was quite special for me as a young coach, there was one detail that I will never forget. As the nature of this training session was very hard, with the goal of expanding Mario’s endurance limits, the professor’s preventive instruction was to, at the sound of the car siren, put his thumb up if he is ok and can keep running, or put his thumb down in case he needs to slow down or maybe even stop. Although I genuinely felt how hard it was for Mario, as I heard a scratchy and painful sound of his breath while running next to him, he had never put his thumb down.

Even now, when I’m writing these lines, I’m getting goose bumps just by thinking about that moment. Was Mario’s ability to endure such intensity of pain a genetically inherited skill or was it developed through the years of committed training? I really can`t tell at this point, but I do know that this was an example of a true champion`s mind!

Years later, every time we get together, he always remembers the thumb up moments and says that nothing compares to this, in terms of discomfort level. After he finished his tennis career, Mario has continued working hard and earned his PhD at the Columbia University, and is now successfully climbing the corporate ladder at the Wall Street. He told me that he feels that his academic and business success was just a follow-up work based on strong foundations built into his mind and body many years ago by continuous intensive training; “Coach, everything was so easy after!”– he says.

In his book “Endure”, Alex Hutchinson presents scientific facts about pain tolerance and its connection to athletic performance, especially in endurance sports. He further explains that there is no doubt that the greatest athletes can do things that the rest of us can’t, and they have developed their bodies to be faster, stronger, bigger, but they have also trained themselves to deal with pain. One of the first studies on pain perception was made by Karel Gijsbers, published in the British Journal of Medicine in 1981. Three different groups of people (elite swimmers, club-level swimmers and group of non-athletes) were put through a series of tests. The first finding was that top athletes were not immune to pain; they felt it just like everyone else (“pain threshold” was the same in all three groups). The second finding showed dramatic differences in “pain tolerance” where the group of elite swimmers outperformed the other two groups by far. Gijsbers subsequently wrote: “the reason behind this result must be in the systematic exposure to intense but intermittent pain during training”. Do great athletes learn to endure more pain or is their greatness a consequence of a naturally high level of pain tolerance? While Hutchinson says that the truth lies somewhere in between those two options, these findings point more towards the former.

“Anyone who has trained sports for longer period of time has learned to go into the zone of discomfort. I believe that all great athletes have learned to tolerate pain, they don’t necessarily feel the pain differently than the rest of us but they frame it differently, it’s information to them, and, as a result, they can stay there for longer”. (Alex Hutchinson)

Even though pain is a genuine part of human experience, I really don’t like to associate the word “pain” with tennis, because tennis should be associated with something smoother and more elegant. However, in today’s modern sport, the words such as pain and suffering are used more often than ever, with, of course, significant differences depending on the sport in question. For endurance athletes, pain is part of the game, and the way they handle it can be directly linked with their performance quality. Tennis is fundamentally a skill-based sport in which “no pain, no gain” motto is slightly more negotiable. For example, the superstar Diego Maradona once said that a brilliant football player doesn’t need to suffer. I’m not sure of this, but at least he made it look easier. Endurance in tennis is important for several reasons I mentioned in one of my previous texts, but not in a way that handling physical pain is directly connected to the final outcome.

Gijsbers continued with his work on the subject and he retested only the group of elite swimmers at three different times of the year, and found that they scored the highest on pain tolerance test in their peak racing season when they reach their physical limits. Following this lead, the researchers from Oxford Brooks University found out that a group of cyclists increased pain tolerance by 41% at a high intensity interval training compared to a medium intensity training that didn’t cause any change. High intensity training also showed a more considerable effect on their racing performance. They came up with another conclusion: higher pain in trainings or racing leads to a higher result in pain tolerance test, and greater pain tolerance predicts better race results. Well, this is all very interesting, but how does it corelate with tennis?

Hutchinson claims that a connection between physical and mental endurance is much greater than we think, and that it’s almost impossible to have one without the other. In tennis, failure or giving up is mainly connected to a mental part of performance. Every match is a psychological challenge; the extent to which the player is able to control his/her emotion and reactions and handle stress directly affects his/her game. Considering the fact that pain tolerance is a great predictor of success in endurance sports, we could say the same thing for stress tolerance (mental endurance) in tennis.

I haven’t seen any research on stress tolerance with elite tennis players, but I assume the result would be the same as with swimmers: they would outperform many and they would score the highest on stress tolerance when playing lots of matches on consistent basis (which equals the peak season in tennis). Issues such as tanking and giving-up scenarios in tennis often start to appear when the player has longer stretches of not playing, which may indicate that a “mental muscle” regulating stress has weakened due to a lack of training! In other words, stress tolerance is a skill that can be trained by being periodically exposed to a high level of mental stress.

So, what can we do about it? Can we really target mental endurance and stress tolerance in our coaching programmes? I would say that it’s certainly not an easy task, however there might be ways. First of all, playing more matches. But, in order to have that, a player needs to win, and that is something we have very little control over. What we can do is to adjust the level of competition so that the player has more chances to win, regardless of ranking. It’s also very important that we don’t avoid potential high pressure matches with our choice of tournaments. Another way is playing more practice matches. This is as close as it gets to a real match, if we approach it seriously. Furthermore, the level of the player`s mental engagement in all of those matches (official or practice) has to be very high. The player simply needs to put himself/herself out there in the battlefield, because any kind of underperformance in that sense could be a significantly limiting factor. “As long as tanking is an option, player’s mental improvement is stopped” (Jim Loehr). And finally, as seen from the text above, there is no doubt that by expanding our physical limits, we are automatically building our mental muscle. “The process of training expands capabilities of muscles and heart, but it also recalibrates the brain’s horizons. In this sense, all training is brain training, even if it doesn’t specifically target the brain.” (Endure 2018)

To sum up, the zone of discomfort, whether in shape of physical pain or mental stress, is an inevitable factor in today’s modern sport. It is also a very prolific subject of scientific research because it seems that top athletes really push themselves to a darker place than most competitors are willing to tolerate. In today’s era of informational abundance where knowledge is everywhere around us and all technical, strategic and methodological “secrets” have been revealed and successfully applied in all fields, the space for outperforming the competition is getting smaller and smaller. That being said, it’s the mind that makes the decisive difference, and it looks like more and more gold medals will go to the ones that are willing to dig a little deeper or even to suffer a bit more.

Finally, are champions born with special minds or have they built them through the years of committed training? In my opinion, from the perspective of pain tolerance as one of the building blocks of a champion`s mind, being consistently exposed to systematic and selective activities will turn any averageness into greatness.